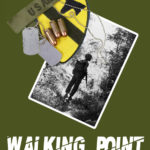 This is one amazing book.

“Walking Point” by Minnesota author Robert Kunkel is a soldier’s-eye view of the horrors of war and how one year forever changed the life of a Minnesota farm boy.

Robert Kunkel grew up on a farm on Pearl Lake in central Minnesota. Far away from the jungles and heat and war in South Vietnam, little did he know how the war would change him. But it did.

This is not a book for the squeamish. The difference between Kunkel’s book and other classic Vietnam War memoirs, such as “A Rumor of War” is that Kunkel saw more direct action in one tour than did probably many soldiers who went to Vietnam.

“This is a view of the common soldier who saw and lived a short portion of the Vietnam War,” Kunkel said in vast understatement at the beginning of his memoir. “I do not believe there is ever a good war. If one has to label a war as being bad, Vietnam falls deeply within the criteria of a bad war.”

Kunkel nearly died in Vietnam and took some lives himself, events he admits will be “forever etched in my mind.”

After being severely wounded, something in Kunkel changed. After a long recuperation in the hospital from injuries, and even though Kunkel’s captain later said he should have been sent home to the States, Kunkel found himself back in Vietnam in yet another firefight.

“I knelt on one knee, pulled up to shoot but pulled my gun down. Kloemken ran up beside me and was aiming his rifle at them as they fled. I grabbed his rifle and pulled it down. He yelled at me, ‘Why the hell did you do that?’ I knelt there, dumbfounded. I didn’t have a clue why I didn’t shoot, or why I pulled his rifle down. My actions were impulsive and puzzling.”

Like many who had seen action, Kunkel returned home, feeling out of place. For a time, he even considered reenlisting. Years later, diagnosed with PTSD, he finally began to come to terms with the war in which he had fought and which had aged him 20 years in one.

This is the ultimate Vietnam War memoir, written by someone who fought in it and was lucky enough to return. Kunkel’s gripping prose has the intensity and focus that only one who has seen war can convey.

“Walking Point” is available from the author, in the Tri-County News office on Main Street in downtown Kimball, and on Amazon.com and barnesandnoble.com. Kunkel’s next scheduled local talk and book-signing is Feb. 28 at the Sauk Centre Public Library.

A trip that changed lives