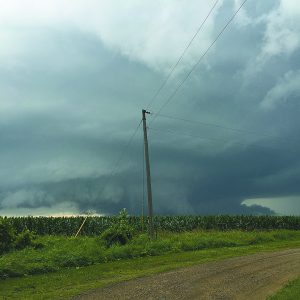 Tornado #1 was a narrow, EF-2 tornado that skirted the NE edge of Litchfield starting at 5:25 p.m. It caused structure and tree damage. Estimated peak winds were 115 mph, and the path of this tornado was 3.2 miles long.

The path of tornado #2, the Watkins tornado, was 3.4 miles long, starting south of town. At its widest, it was 400 yards wide. Kramer Electric on the south side of Highway 55 disintegrated when hit; bits of the building’s insulation were strewn northward through St. Anthony Cemetery and through the center of town. There was damage to several structures, and many trees were destroyed. The most significant damage was between Stearns Avenue and Meeker Avenue. The tornado left Watkins at Hilltop Health Care Center to the north, taking down trees on a farm before lifting shortly thereafter. This was an EF-2 tornado. Estimated peak winds were 125 mph. Of all three tornadoes, there was only one injury, and it was caused when a wall came down onto the resident inside who had sought safety under a table (which no doubt saved her life). Electrical wires snapped, and live wires lay across Highway 55 preventing safe through travel. Land-line and cell phone communications were cut off at least briefly.

Tornado #3 came along 2 minutes later. It touched down south of the first one, laying flat corn in the field. Two open-air cattle sheds were completely destroyed, as was a metal storage shed and two nearly empty grain bins. Two cattle were killed at this farm. This EF-1 tornado’s path was 4.2 miles long. It lasted 6 minutes, and was 250 yards wide at its maximum. Estimated peak winds were 105 mph.

The EF (Enhanced Fujita) scale goes from 0-5, with 5 being catastrophic. EF-1 is considered “moderate,” and EF-2 “significant.”

… and then the helpers came

When the dust had barely settled after the July 11, 2016, tornado hit Watkins, neighbors were out on the streets checking on each other, and helping with immediate needs. 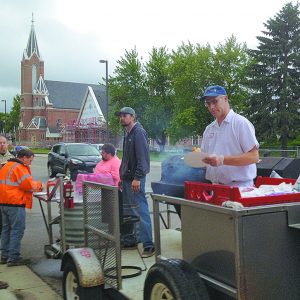 That next day, Gov. Mark Dayton visited the command center at the Watkins Fire Hall. He toured the tornado route, and visited with residents at Hilltop Health Care Center who had been evacuated by school buses the night before. U.S. Senator Al Franken made a quiet visit to Hilltop, listening to resident stories, and talking with city officials. Donations of food and water and household supplies started coming in at City Hall. Volunteers showed up to help, in such numbers that they were sometimes turned away. Hot meals and cold water were served up by volunteers at the Village Hall, for both helpers and those in need. Coolers with water were placed around town for anyone who needed refreshment. 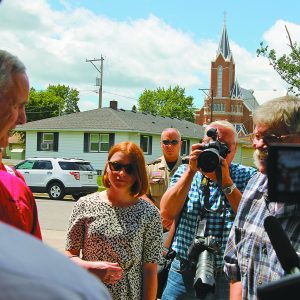 Total strangers showed up to help, sometimes by the busload. It was a wonderful thing to witness, and proved that there truly is much goodness in the world.

Thank you yet again to all who helped. And here’s to all who endured and survived the Tornado of ’16.