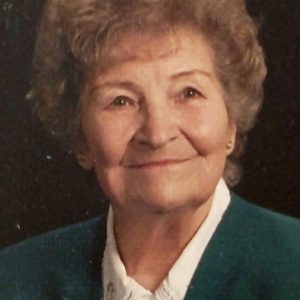 Phyllis Schempf was born May 3, 1920, in Gibbon to Frederick and Alma (Possin) Schempf. She attended Kimball High School and graduated as Valedictorian. She married Orwald “Orville” Meyer, and they were blessed with two children. Phyllis worked as a homemaker for many years. After Orwald’s death in 1961, she began to work at 3M in Hutchinson. Years later, she married Daniel Holtz and she worked as his secretary for the Minnesota Town Board Association. In her community, she was the manager of the Meeker County Republican Party.

Phyllis was a member of St. Paul’s Lutheran Church in Eden Valley where she participated in the choir, the Ladies’ Aid Society, and volunteered her time as a Sunday School teacher. Phyllis enjoyed ceramics, especially painting dolls and making their clothing. She also enjoyed gardening flowers, and sewing. She was most proud of her family and her involvement in her church. Phyllis was a woman of strong faith who will be remembered as being very giving, thoughtful, and tender-hearted.

Phyllis was preceded in death by her first husband Orwald Meyer in 1961, second husband Daniel Holtz in 1990, daughter Mary (Meyer) Rood in 2018, and brother Jerome Schempf.

She is survived by her son Jerold “Jerry” (and Iona) Meyer of Coleraine; and nephews Phhillip (and Janet) Schempf of Juneau, Alaska, and Bradley Schempf of Fort Collins, Colo.

Slightly cooler temps and less humidity will be appreciated