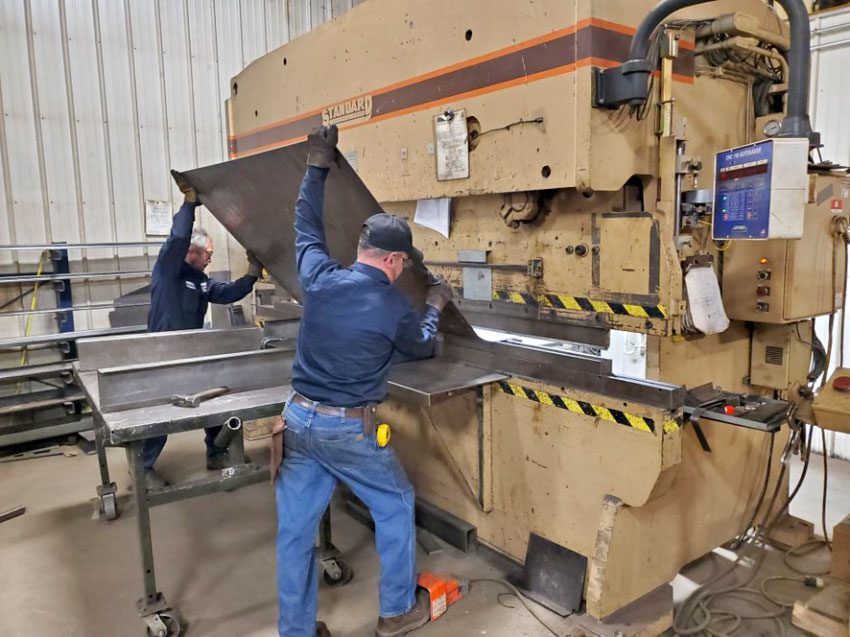 While preparing for this interview with Dan and Diane Thielen, I was thinking, how do you end up starting a business like this? Do you wake up one morning and think, I want to weld things that can be attached? Turns out, as with any other business, one thing led to another during their careers, leading to the start of Thielen Machine and Welding in 1986. In the early years, both worked other jobs while building their new business. Diane worked as a Dairy Lab Assistant for AMPI in Paynesville from 1970 to 1994. Dan held a number of positions over the early years while honing his craft, but actually got his start early while working on the farm and taking welding class in high school. Who knew where that would lead? His early working years included time at Custom Products, doing maintenance at Cold Spring Granite, and a brief stint in farming while working at Mills Fleet Farm Supply. In the late ’80s, Dan went to work at Palm Attachments in Grove City, staying on when they sold to Bobcat in Litchfield, holding positions in management, welding, and design.

He remained with Bobcat until 2005 when he joined Thielen Machine and Welding full-time. Dan’s brother Greg Thielen, came on board in 1987 as Plant Manager. Diane has spent some time doing shop work, though she admits it’s not really her favorite thing to do. You will normally find her running the office. While building the business, Dan and Diane also raised six children. As with most family businesses, some of the kids worked in the business at various times over the years. Their son Michael Thielen is also full-time with the business today.

From 1986 to 1994 the business was located in a building at 380 Vail St. North. In 1994, they bought the land where they are currently located at 522 Meeker Ave. E. and built an 8,000 square-foot facility. In 2010 they added 10,000 square feet. When you drive by a business like Thielen Machine and Welding, you often have no clue what goes on behind those walls. I’ve lived here 20 years, have known Thielens for 12 of those years, and I had no idea what great things they create, and how far reaching their business is.

I can’t even begin to tell you everything they build. I recommend that you visit their website (http://tmwattachments.com) and look around. If you find yourself in their lobby, you will find some interesting items on display. Letting my true “towny” show, I had to ask what these rather intimidating items were. Turns out they are bale forks used to move large bales around, and hitch adaptors for tractors. About 70% of their business is in manufacturing. They manufacture attachments for the construction, landscaping, and agricultural industries. Their attachments are designed to hook up to most skid steers, compact tractors, ag tractors, and telehandlers. They can also build attachments to a customer’s specifications. In addition, they build Grain Master belt-conveyors for handling grain, seed, and various other products.

“Our goal is customer satisfaction. To achieve this, we are always updating and expanding our product line to meet our customers’ needs and expectations” – Dan Thielen. This statement has clearly worked well for Thielen Machine and Welding. They have six sales reps, and distributors in New York, Fargo, and St. Louis, each with their own sales reps. They not only ship nationwide, but also to Canada and overseas. They participate in one to four Industry Shows per year showing their production line in a 40’x40’ booth.

With production taking up 70% of their business, the remaining 15% is repair and 15% piece work, often for local businesses and organizations. Dan said they attribute their success over the years to this diversity, being able to create, fix, or design. When the economy gets tough, and people are less apt to purchase new, their repair service often increases. When I asked Dan and Diane what their favorite things were about owning this business, they said the best thing is not knowing what will come in the door at any given time, and working with and helping people solve their problems. They design things to solve problems. I bet you have seen their handiwork around town and just not known it. Check out the amazing carts built to hold the chairs and tables at the Community Center, or the posts holding the new Friederichs Park sign. For KBI, they created a large oven used to make powdered eggs for use in animal food. Thielen Machine and Welding, along with Eden Valley Lumber, will be creating park benches to be placed in various locations around town. If you are interested in donating one of these benches, please call Eden Valley City Hall at (320) 453-5251.

They shared a fun list of items they’ve repaired, from the smallest items – a garden dragon lawn ornament and lawn chairs, up to semitrailers and farm equipment. Neighboring business, Glow Holiday Festival (you’ll know them by the ginormous gift boxes out front) has become a pretty regular customer. There are a number of their items in the yard at Thielens being repaired – including giant silver bows and a 15 foot metal moose (yes – I said moose) You should check out their website Glowholiday.com – it’s pretty fun – it will explain the giant gift boxes (and the moose, too).

With everything I’ve told you about Thielen Machine and Welding business, the thing that astonished me the most is that they do everything they do with a total of seven staff members (including them) between the hours of 7 a.m.-3:30 p.m., five days a week. Pretty impressive. If you are interested in joining their great team, several of whom are long-term employees, please apply in-person.

The Thielen’s would recommend to anyone starting a business in Eden Valley that they build a good relationship with local businesses, organizations, and the community. Also to know that, with today’s technology, you can have a business of any kind in a small community. You know longer need to be located in a large city to be successful, you just need to have the courage to start.

Dan and Diane Thielen (and several family members) are heavily involved in our Eden Valley community. Diane has been involved in Girl Scouts since 1986. She volunteered at the local schools while her children attended here, was involved with creating the Eden Valley Area Library and is a member of the Library Board. Dan has been involved in City government since 1991 with eight years as Mayor and with City Council all but two years. Dan recently retired after 41 years with Eden Valley Fire & Rescue (as did his brother Greg). The Thielens are involved with the Assumption Catholic Church of Eden Valley. They have both been involved in Healthy Communities and Eden Valley Citizens for Progress (EVC4P) committees since 2010.