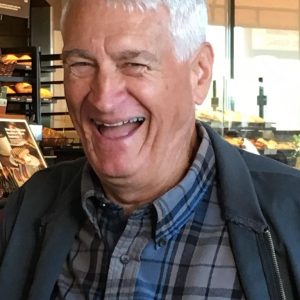 Robert is the eldest of the six children of Donald and Rosella Markwardt. He grew up on the family farm near Kimball. He worked as a computer technician for Control Data in the 1960s, and then as a salesman for the Independent Order of Foresters in the 1970s through retirement. He also farmed with his father and brother Keith during this period. He lived in St. Cloud for the past 45 years. Robert enjoyed drives through the countryside, visiting with numerous friends and clients, and following sports teams. He had a wealth of knowledge about sports history, and had a great memory for the details of exciting games.

Robert was preceded in death by his parents, and brother-in-law Terry Bell.

He is survived by his partner Meredith; sister Judy Bell; brothers Daniel (and Patty) Markwardt, David Markwardt, Terry (and Deb) Markwardt, and Keith (and Nancy) Markwardt; and seven nephews and two nieces.

In lieu of flowers, family has asked that a donation be made to your local food shelf, the Alzheimer’s Association, or a charity of your choosing.

Local boy competed in pedal tractor pulls, goes all the way to nationals