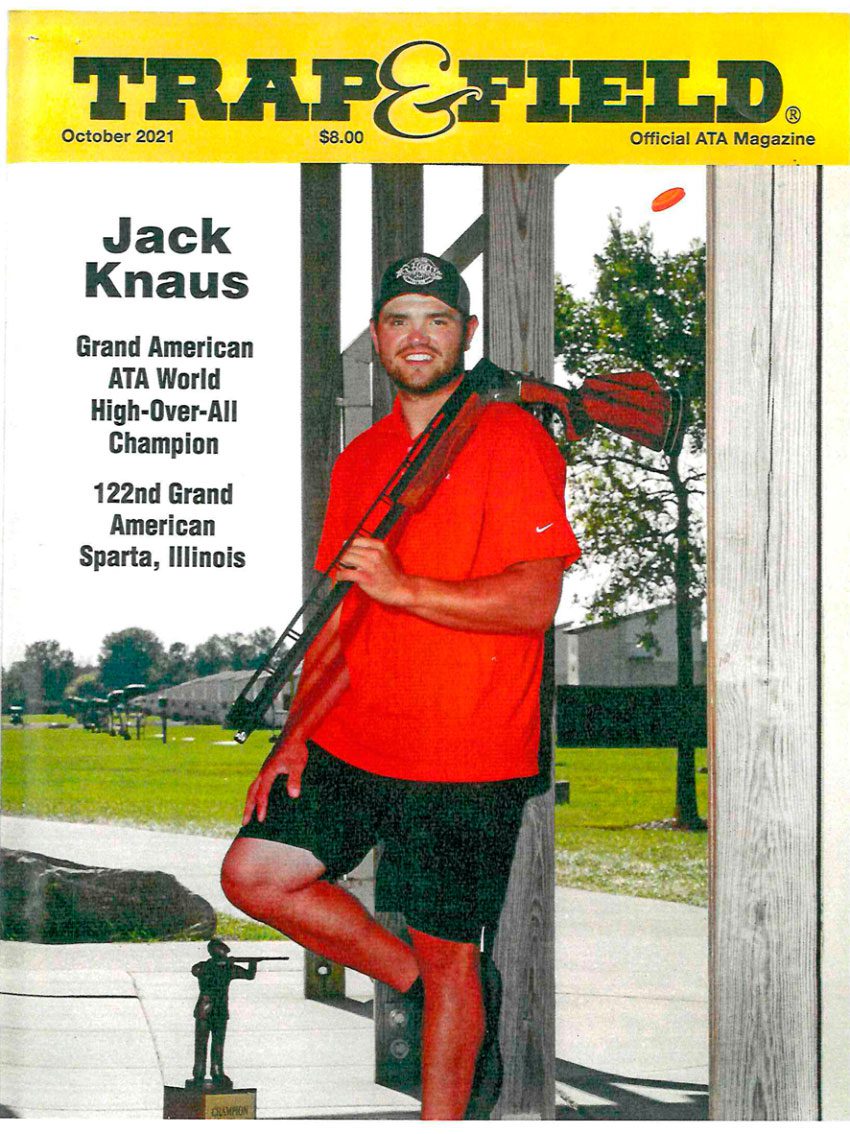 With 986×1,000 Jack Knaus won the ATA World High-Over-All title, leading runnerup Keith Ditto by one bird. Ditto was champion of the 2,600 HOA, based on the entire 11 days of the tournament, pacing the competition by four with 2,556.

Nineteen-year-olds have headed the 1,000-bird race for the last two years and, at 18, Knaus is the second-youngest to capture the title behind Ned Lilly, who won it in 1933 at age 17.

Knaus broke a 197 and 200 in singles, two 99s plus a 97 and 94 in handicap, and two perfect twin-bird scores to win the crown. He captured the Junior titles in both the class and championship
doubles plus the President’s Handicap, and he was age-group third in the Challenger Ammunition Handicap. In the 2,600 race, he won the junior prize with 2,538.

Missing just 14 targets during Grand Week, 18-year-old Jack Knaus of Watkins, won his first Grand American ring, topping all competitors in the High-Over-All. His 986×1,000 total made him the second-youngest to claim the title.

Starting Grand Week with a 197 in the Class Singles, Jack buckled down. He followed it up with a 99 in Tuesday’s handicap then ran the doubles to capture the junior title in both. With another 99 in handicap Wednesday, he ended with his age group’s third-place award. Three more junior crowns came his way that week – in the Doubles Championship with 100, plus the All-Around and 2,600 HOA. He had already won five trophies during Prelim Week, including top junior in the 1,000-bird HOA.

Jack found out he was leading the Grand Week HOA Wednesday night after his handicap shootoff. He had not been looking at the scores and learned from someone else that he was in front. “Once you find out you’re in the lead, you don’t want to lose it.” With 500 more birds in the program, “I knew there were a lot of targets left.”

The Clay Target Championship was the next day, and the shoot was starting to wear on Jack. “I was a little more nervous and definitely more focused. Walking up on Thursday, which is a big day for every trapshooter, it definitely put more pep in my step to do well.”

Saturday morning is when he felt the most pressure. “It pushed me to shoot a little better.” The two hours after he was done with the Grand American Handicap, where he broke 94, were rough. “My performance was not the greatest – it was definitely windy – but I wish I could’ve done a little better,” Jack said. He knew Keith Ditto was also a contender for the title, and he waited to see what Keith broke. After a few long hours, Jack learned that he had secured the win by one bird.

Jack shot with the same squad all week, which included Lane Zabokrtsky, Mitchell Pierson, Ryan Glow and Mitchell Germany. The squad broke 996×1,000 in the Clay Target Championship and included 200s from Knaus and Germany. After both posted 100s in the Doubles Championship, they were two of just four shooters who entered the Grand American Handicap with 300s in the race for the All-Around.

Doubles is Jack’s favorite discipline, and he posted three 100s during the tournament. “They are the least stressful and [most] fun to shoot,” he said.

At the Grand last year, Jack won the Winchester Super 400 Singles over the field with 400. He said, “This is one of my best accomplishments, and it meant a lot to me.” He also topped all competitors in the opening 16s.

Jack won his first Minnesota state title in 2019 with a 98 in the feature twins. He made it to the 27-yard line at the 2017 Minnesota State Shoot with a 96. He said that had been a big goal for him.

His biggest goal now is to finish off his ATA Grand Slam, with the last leg being a 100 from the back fence. “I’ve had enough dang 99s in handicap; I would really like to get that done,” he said.

Jack made the All-American team for the third time in his career this year with a second-place finish on the junior team. He placed on the sub-junior squad in 2018, and landed on the 2021 junior team.

One of Jack’s goals now is to make the All-American first team next year as a junior gold.

He currently attends North Dakota State University and plans on majoring in agriculture economics and minoring in business entrepreneurship. He hopes to open his own business for advising farmers.

Jack’s 2021 shooting season started in San Antonio with the Southwestern Grand. He said he did not do very well, but “it was just the first shoot of the year.” He ended up winning five trophies there.

After San Antonio, Jack went to Linn Creek to take part in the Missouri State Shoot. He grabbed a couple of junior awards throughout the week, including in the HOA.

Jack, who shoots a Kolar Max Trap Low Profile and Winchester AA shells, then shot the Kansas State Shoot, which he said was one of his best of the year. He was the non-resident event winner in the main handicap and HOA with 97 plus extras and 1,181×1,200. He won the Doubles Championship category trophy and, in the feature singles, he and Pierson tied with 199s. After a 300-bird shootoff, Mitchell ended up the winner.

Jack traveled to Wyoming where he said he had a tough week. “The weather kicked my butt out there.”

The week after, he shot in his own state shoot in Minnesota where he collected nine awards. He broke 99 in the Handicap Championship and shot off for event high gun, ending with the age-group trophy.

For the rest of July, Jack did not compete at all. He usually hits more shoots before the Grand, but this year his dad needed help with his concrete business.

Jack then headed to Sparta, Ill., for the Grand American and shot the entire tournament. Without his normal schedule coming in, he hoped “maybe my first couple of handicap events would help me get back in the groove.” He broke a 98 in caps on the third day, and two 99s during Grand Week. He felt his singles and doubles were on par for the rest of the shoot.

When asked how he deals with pressure, Jack responded, “I would just tell someone to keep their dang head down and keep pushing through it.”