Myrtle Cole was a quiet widow who had lived in her run-down home in Fair Haven for 20 years. The two-story house had electricity, but no running water. Her meager sustenance was limited to Social Security and food stamps. She was friendly and caring although strong-willed, generous, and very religious, hosting a weekly Bible study at her -simple home. She had taken care of her mother much of her adult life, marrying at 48 to a man 11 years her senior; he had died in 1970.

And she was fearful by nature. She especially feared someone breaking into her home and harm her, so she kept her doors locked at night.

Indeed what she feared is exactly what happened. Sometime in the early morning Saturday, Dec. 12, 1981, a window of Cole’s home was broken to gain entry into her home. While there was nothing that appeared to be stolen, the individual did take Myrtle Cole’s life – violently and brutally. 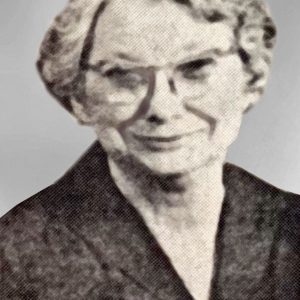 It was Cole’s nephew Milo who found her the next morning. She hadn’t answered the phone when he called that morning for his daily check, so he drove the two miles to her house. He found the broken window, and glass strewn across the kitchen floor and on top of the stove. Otherwise the kitchen looked normal, as did the living room. When he entered his aunt’s bedroom, though, he saw her lifeless body on the bed and he called police from the kitchen.

Within an hour and over the ensuing days, the little town of Fair Haven was flooded with law enforcement and investigation teams that included Stearns County deputies, the Tri-County Major Crimes Unit of Benton and Sherburne Counties, Minnesota State Patrol (and its helicopter), Minnesota Bureau of Criminal Apprehension, and even Stearns County Highway Department surveyors. Eventually, the FBI and the Behavioral Science Unit in Quantico, Va., were brought in, developing a psychological profile of the perpetrator.

The community was still unsettled about the Huling murders that had been committed just five miles away and nearly exactly three years earlier, also on a night with a full moon. (The Huling murders were not solved until Joseph Ture was convicted of the crime in 2000.) 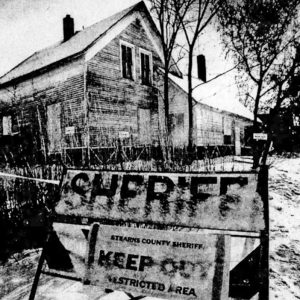 At the time, Stearns County Sheriff Charlie Grafft limited information he released to the public about this case, claiming not to want to do anything that would hinder or delay solving the murder.

Myrtle Cole had been strangled, and stabbed multiple times all over her body. She was found lying on her bed, with a quilt covering her head and face.

No weapon has yet been found; it could be a knife, or a sharp-edged blade.

Multiple fingerprints were found inside the home, but none have matched with any suspects so far.

A bloody palm print on a pillow case that was found in early January 1982 may be the strongest piece of evidence so far; and it likewise has not been linked to any suspect.

An FBI profile of the perpetrator of this heinous crime was released around June 1982. This profile leans toward a young person likely with mental health issues.

Based on early investigations, that Friday night/Saturday morning was a very busy one in Fair Haven. Lt. Victor Weiss of the Stearns County Investigative Unit says heavy activity in the area that night included drug use, and “other violent stuff going on.”

Among those who have been definitively ruled out as the perpetrator are the three young men who helped Cole weatherize her home (and whom she fed a big dinner) just days before the murder, and her nephew who found her.

The investigation of Myrtle Cole’s brutal murder has remained open all these 40 years. Forensic science has evolved, and evidence is being re-evaluated with new technology as it comes along.

Hundreds of people have been investigated as possible suspects, including some who claimed to have committed the murder, some who were in the area involved in other suspicious activity, and criminals across the country who have committed similar murders. Many of them have been ruled out as suspects.

“We still have a fairly long list of people who can’t be eliminated,” says Lt. Weiss. Those still on the active suspect list include local people, Minnesota residents, transients, and those who have committed similar crimes.

The current list includes about six people they are focusing on now. As one is eliminated, another usually comes into focus.

Although pretty much dormant for many years, this case has been “very very active” in the past 4-5 years, Weiss says. The team is looking at new angles, new science, and they are newly determined to solve this crime.

They are looking for any information about that night that can lead to new people to interview, for instance. They have re-examined all evidence, and carefully check timelines to see what doesn’t fit.

Mary and Suzanne Reker (sisters found murdered in a quarry in September 1974).

The 1976 bombing of the Kimball Post Office is more in the hands of the FBI and Postal Inspector today, although it’s still on the Stearns County list of cold cases.

How you can help

Call the Stearns County Sheriff’s Office with any information you may have, even if you think it’s already been reported by others. Or call the Tri-County CrimeStoppers tip line. It is possible to remain anonymous while the investigation is under way.

Any new piece of information could lead to solving the case. “I think it’s going to be solved by someone who knows something,” says Lt. Weiss.

Lt. Weiss added that, in his experience, someone who has long held onto possible information about a crime often finds relief from their fear and worry once they reveal what they know. “In most cases,” he says, “it’s something we already knew,” or leads to a person who has already been eliminated.

Tri-County CrimeStoppers is offering up to a $1,000 reward for information that leads to the arrest and formal charging of a suspect in this case. 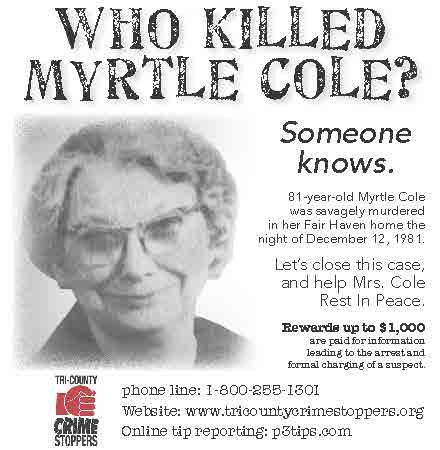