At about 6:26 p.m. Monday, Nov. 22, the Stearns County Communications Center received a call from a passerby reporting that there was a single vehicle rollover near the intersection of Upper Valley Road and 260th Avenue in Millwood Township. The passerby stated that the driver of the vehicle appeared to have serious injuries.

Upon arrival Stearns County Deputies found a 2003 Dodge Dakota that had been driven by Jose Guadalupe Munoz-Munguia, 26, of Melrose. It is believed that the truck had been traveling westbound on Upper Valley Road when the driver swerved to avoid hitting a deer, failed to negotiate a curve in the road, entered the ditch, and rolled several times.

Munoz-Munguia was transported to the Melrose Hospital for further medical evaluation.

The Stearns County Sheriff’s Office responded to the scene and was assisted by Freeport Fire and Rescue and Melrose Ambulance. 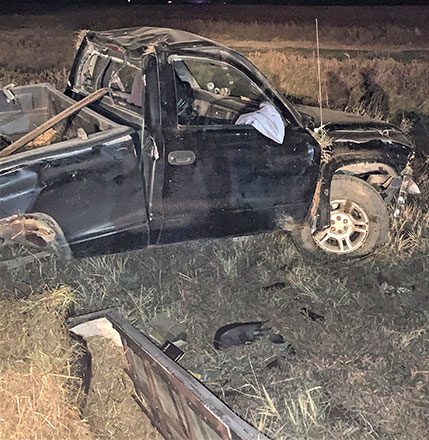