On June 3, 25-year-old Keisa Lange of Kimball was found dead on a street in St. Cloud, having been shot in the head. Four were indicted for her murder in July: Deantea Davis, 23, of St. Cloud; Kenneth Carter, 25, of St. Cloud, Angela Jones, 33, of St. Cloud, and Alicia Lewis, 36.

The Kimball American Legion Auxiliary attended the 6th District convention June 4-5 in Nisswa. From the Kimball unit, Dori Hamilton, Barb Hopewell, and Colette VanVleet were elected to the offices in the 6th District.

The 13th annual Stearns County Breakfast on the Farm was held June 5 at the Kerfeld Hillview Family Farm near Melrose. As usual, the Kimball Lions served up a free breakfast at the event.

The Breakfast Club at the Stearns History Museum resumed June 9 after a lengthy hiatus because of COVID-19.

The EV-W/K track & field girls are 2021 Subsection Champs after placing first at the MSHSL Section 5A Subsection 20A Championships on June 1 in Litchfield.

A grand opening was held at Friederichs Park in Eden Valley on June 13. There was live music, the brand-new splash pad was on, and there were food vendors available. Friederichs Park was made possible first by the city’s purchase of the Friederichs farm site, a DNR Outdoor Recreation grant, donations and work by the Eden Valley Lions Club, and private donations. 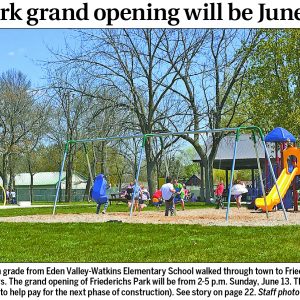 On June 15, Litchfield hosted its second annual Parade of Bands, with 13 bands competing in a marching band competition, each performing in three locations in town.

The Watkins Swimming Pool finally opened for the 2021 season, after being closed throughout 2020. The new managers are mother-daughter team Kris and Bella Butterfass.

The City of Kimball installed a nine-hole disc golf course in Willow Creek Park. In disc golf, discs (like specialized Frisbees) are played into chain-basket “holes” with the fewest number of throws to win.

The Kingston Mini Mart held a series of burger nights throughout the summer, each one benefiting a different local cause.

The City of Kimball issued a temporary watering ban effective June 14 because of a large increase in water usage and the expected continuance of hot and dry conditions.

The Kimball Golf Club was named the #9 best course in Minnesota by Golfpass.com this year.

Fourteen athletes on the EV-W/K girls’ track team qualified for the state tournament.

The Stearns History Museum hosted two weekends of an exhibit, “At War: A World War II Experience” June 19-20 and July 10-11. They also hosted “At Ease: A World War II Evening” featuring live music and entertainment from the era, as well as catered appetizers and cocktails inspired by the era.

The Fair Haven Old Settlers Day was postponed in 2019 because of road construction, and again in 2020 because of COVID-19. But the 2021 Old Settlers Day was held June 26. The parade returned, as did kids’ games and more. Concordia Lutheran Church provided the pork chop lunch.  The Royalty coronation was that afternoon: both Trinity Helget and Emily Bidwell were crowned as equal Ambassadors that day. 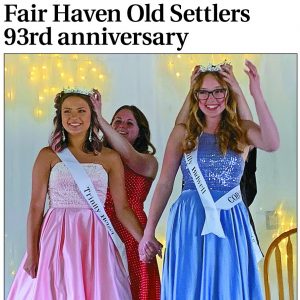 Valley Daze returned in 2021, after a year off because of COVID-19, with events scheduled for June 25-27. With a new committee in place, there were new events in addition to old familiar ones. And with road construction going on in town, there was a new parade route this year. The theme this year was “Hometown Heroes” celebrating those on the front lines of law enforcement, health care, and more. The Grand Marshals were school nurse Anno Johnson, and childhood cancer survivors Alexis Vossen and Alizabeth Ludwig. 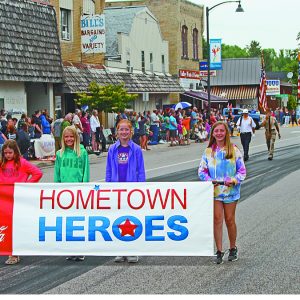 St. Mary Help of Christians parish festival was held June 25-26, but with a drive-up pork chop and hot dog dinner, and an outdoor Mass. They also held a raffle drawing, and an online quilt and basket auction.