The Kimball Clean-up Day was held May 1, in the parking lot next to AM Maus & Son as usual.

Ertl Hardware held an open house May 1 to introduce the non-livestock animal feed now available there.

The Ducks Unlimited Maine Prairie Chapter banquet was held May 1 at Powder Ridge.

The Kimball Senior Scholarship organization held its annual Dessert Dash and awards ceremony May 5 at KAHS. 21 scholarships were awarded with a grand total of $20,250 for this year.

At its May 5 meeting, the Eden Valley city council approved an EDA loan of $150,000 for David Tysk and his group to construct market-rate apartments in Eden Valley, similar to the apartments already under construction in Watkins. Construction would begin in the fall.

The EV-W FFA received top honors for the State FFA National Chapter Award, sponsored by the Minnesota FFA Foundation. EV-W was one of only 10 top chapters in the state for this honor.

This month’s Eden Valley Chamber Business Showcase was Lost and Found in Eden Valley, owned by Tom and Mary Mathies.

Students at Kimball Elementary School collected donations for the Kimball Food Shelf. The classrooms raising the most were Holli Sauerer’s first-grade class, Melissa Herrington’s fourth-grade class, and Horn/Allison Miller’s first-grade class. The whole school had an outdoor assembly where paras Penny Blanchard and Tom Kingery along with principal Joel Timmerman would kiss a pig (and they did, much to the delight of students and other staff). 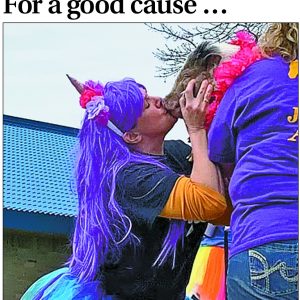 The EV-W Band Concert was held May 10, with the Choral Concert held May 17. Both were live-streamed because of COVID-19 restrictions.

The Kimball “Old Coots” flocked together on May 11, at Triple R Grill & Bar in Kimball, after taking more than a year off because of COVID-19. 21 Coots attended.

In a sign that some things are returning to relative normal, graduation open houses were being scheduled already in May.

EV-W junior Alex Haag was selected to attend Minnesota Boys State in June; Jackson Geislinger was selected as the alternate.

The Kimball Legion Auxiliary  honored Sidnee Hoffarth, their 2020 Girls Stater on May 20. Since Girls State was canceled last year, the Auxiliary instead gave her the $300 it would have cost to attend. Hoffarth also received the Citizenship Award from the Kimball Auxiliary.

The KAHS theatre department performed “The Sound of Music” May 14-16 at the high school.

May 15 was this year’s fishing opener. This was also the day of the Kimball Area All-City Garage Sales.

A memorial constructed by the Larry Krippner family (with the help and support of lots of volunteers) near the site of the December 2019 National Guard helicopter crash that killed three crewmen was officially dedicated on May 15 in a private ceremony, and a public ceremony May 16 with U.S. Senator Amy Klobuchar speaking. A busload of Northstar Dustoff (National Guard Charlie Company) members and families arrived for the service on the 15th. The memorial, and the services, is dedicated to Chief Warrant Officer 2 James A. Rogers Jr., Chief Warrant Officer 2 Charles P. Nord, and Chief Warrant Officer Candidate Sgt. Kort Plantenberg. The open-air memorial is open to all as a beautiful space of solitude and contemplation. 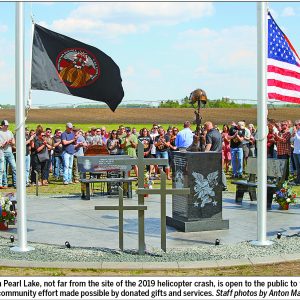 Ground was broken May 16 in Eden Valley for a new 20-unit apartment building, similar to that to be completed in the fall in Watkins by the same group, Meeker Leased Housing.

The City of Kimball returned their adopt-a-flower-pot program this summer.

2021 Graduation inserts were included with the May 20 Tri-County News.

The Kimball Lions held a plastic recycling program this summer with a goal of collecting 500 pounds of plastic bags and wrap; the drive was successful, and the reward was a park bench made of recycled plastic.

The start of the Watkins Pool season this year was delayed because of lack of staff. It had already been decided that there would be no lessons in 2021 for the same reason.

Kimball eighth-grader Ellie Becker tied the KAHS high jump record of 5’5” (set in 2016 by Hannah Ehlinger) at the May 20 quad meet at HL-W-W.

Both Watkins and Eden Valley held their city-wide garage sales on May 22.

The Kimball Lions golf tournament was scheduled for May 22. 115 golfers participated, and the winning team included Jeff Haugen, Brian and Brooke Mueller; second place was a tie between Team Knaus and Team Orbeck.

Kimball got a new option for groceries as of May 26: a CashWise pick-up site in the building formerly occupied by Gohmann’s Foods. Online or phone grocery orders are shopped at the CashWise store in Waite Park and delivered to the Kimball site for pick-up daily.

Kimball’s graduation was held May 27 for 41 individuals, starting with a parade through town. In order to comply with COVID-19 precautions, the public was invited to cheer on this year’s grads from Kimball streets as the parade passed by. The graduation ceremony was live-streamed as well. 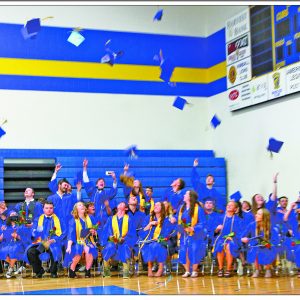 Eden Valley-Watkins graduation was held the same night for 66 individuals, in the Johnson-Peterson gym, with the audience limited to families only. The EV-W graduation ceremony also was live-streamed. 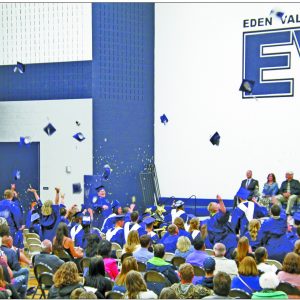 In a severe shock to the community, May 28 was the last day (ever) of school at Holy Cross School in Marty/Pearl Lake. The Diocese had made the decision, without input from anyone in the parish, to permanently close the school after 116 years. Any protest from the community, school, or parish was futile. On May 28, students, staff, families, and alumni held a ceremony of closure, celebrating the 116 wonderful years that they had, and bringing a peaceful and joyful end to the school. Members of the parish and friends of the school held a party on June 17, a somewhat somber thanksgiving party. (The building itself will remain in the parish, and has been designated by the Diocese for use in youth education.) 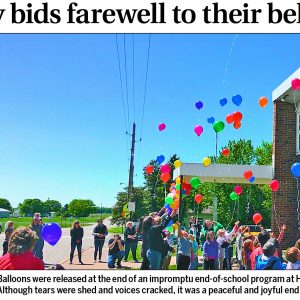 EV-W sixth-grader Ivy Andreasen won a Minnesota lifetime angling license, presented by Keith Ruprecht of the Eden Valley Sportsmen Club at the sixth-grade graduation on May 28.

Memorial Day services were held locally on May 31, in Eden Valley, Forest City, Kingston, and Watkins; Kimball opted to cancel this year because of COVID-19 restrictions.

Schultz on road to Beijing Paralympics