This week, Kimball’s own “Monster” Mike Schultz is in Norway for two weeks, in the second-most important competition of the season, a World Cup, second only to the Paralympics in March. This also marks his first competition in boardercross this season. 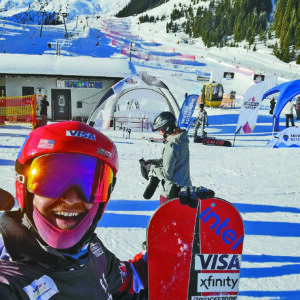 The plan is to compete in both banked slalom and boardercross – both events on snowboard – at the Paralympics in Beijing, China. Although already named to Team USA for the Paralympics, Schultz must earn his spot in both events. How he performs in the international competitions in the coming weeks will determine that. Nothing is a given, Schultz says, until the final teams in each event are named. But it should surprise no one that Schultz is feeling very optimistic about his chances.

Winning a gold and silver medal in the 2018 Paralympics in PyeongChang, Korea, was certainly a high spot in Schultz’s long professional athletic career. His wife (and high school sweetheart) Sara watched and cheered from the stands, while 4-year-old daughter Lauren watched on TV at home with her grandmother. Now that Lauren is 8, Schultz was really looking forward to sharing another Paralympics performance and victory with both his daughter and wife in China. But China is not allowing spectators, even family.

Another change this year from previous Paralympics is that China has not allowed teams from other countries to preview and practice on the courses in various events. Few expected pandemic restrictions to still be in place, but that’s a reality across the world.

The boardercross event is changed this year as well. Rather than having two athletes racing head-to-head, there will be four racers at a time making each run. The course will be wider to accommodate them, naturally. “That’ll be fun,” Schultz says, “which gives you more space to work around, trying to make passes and that kind of thing.” And the course on each mountain will be different based on the local terrain.

The 2022 Paralympics will be televised, and we’ll share those details as they become available.

Speaking of his daughter, a burgeoning athlete in her own right, Lauren has become his training partner. They ride horse together, with horseback riding pretty much tied with gymnastics as her passion. She got hooked with a five-week gymnastics program through Kimball Community Ed. When it was over, she asked, “Mom, how do I do more of this?” Lauren has trained now for three years at Granite City Gymnastics – three days a week, four hours at a shot. When she’s not in gymnastics, she’s in their home gym with her dad, “Doing pull-ups and push-ups, and doing my agility workouts and stuff,” says Schultz. “She’s my training partner.” Lauren is a very determined and competitive athlete, like both of her parents.

Although the idea of writing a book had been floating around in his head for a couple of years, it was winning gold and silver at the 2018 Paralympics that got him wanting to document his story. With the help of his publicist Katie Swope, he interviewed three potential co-writers and Matt Higgins emerged as a perfect fit. As a New York Times writer, Higgins had interviewed Schultz several times during his snocross career.

Higgins spent many hours with Mike and Sara Schultz, listening and recording as they recounted events from “Monster” Mike’s career. The time period covered in the book is roughly 10 years, from his horrific snocross accident that cost him his left leg, to his gold and silver medals at the 2018 Paralympics. The story covers in graphic detail two painful accidents, and Schultz’s fight to come back from them; his wife Sara’s true partnership that contributes to Mike’s athletic and business success; the birth and evolution of BioDapt, his company that makes high–impact lower limbs for athletes and other active amputees. The book portrays the balance between the utter triumphs and the devastating lows, with so much hard work in-between.

Recounting the most painful events in his life, especially with his wife Sara by his side, was emotional for Schultz. “Digging deep into those emotions … it makes the heart race and my palms get sweaty and, you know, reliving some of the moments while Sara was sitting right next to me,” Schultz told us last week. “Writing this book put us in a deeper, more detailed, emotional state than I’ve been in, you know, since the accident. So there were some tough moments, especially for Sara. You know, I talk about it all the time … maybe not into that depth, but, you know, so I can handle it. It was difficult to sit next to Sara and write this all out or play it all out.”

“That’s what’s so special about it, that’s what makes those triumphs so special is because of all those tough and challenging times that we went through in order to get there. I mean, that’s the story,” says Schultz.

Schultz was allowed 24 photos in an insert in the book. Selecting only 24 photos from amongst the thousands and thousands he and Sara have from his career thus far was difficult. They found 24 photos that are “explanations of the moments that are covered in the book,” he says.

After the Paralympics, Schultz can begin to work on a book tour, probably several book tours, starting in Minnesota, and then possibly several national tours. He looks forward to it.

Schultz has been busy preparing for the Paralympics since he was named to Team USA more than a year ago. He hasn’t had a lot of time to ponder his post-competitive life and career. In many ways, though, the world is his oyster. There are so many options open to him: coaching, book promotion, public speaking, and expanding BioDapt in many directions are the most obvious.

“I thoroughly enjoy coaching,” Schultz says. “I’ve had coaching positions several times and I enjoy sharing the things that I’ve learned over the years of competing. And, you know, working with coaches and trainers, and at all these different types of competitions, I’ve got all this knowledge and I feel I need to share it with somebody to help the next generation progress.” Coaching is a very likely option, although he’s not sure which sport that would be in since he’s excelled at several.

Schultz also looks forward to time off with his family, joking that he may just disappear into the north woods at some point, to “just sit in my lawn chair at the cabin, ride my horses, read my book, and reflect.”

“I’ve been charging hard for a long time. You know, it’s getting close to the time where I need to just take a break.”

Like so many other challenges in life, we can count on Schultz jumping into whatever comes next with full gusto.

Where the drive comes from

“As far back as I can remember, I’ve always been very driven” says Schultz. “Like, if I had an idea I wanted to accomplish it, I would go until I couldn’t go anymore. And throughout my entire adult competitive career, it gets backed up every time I accomplish something big, and what it took to get there.”

“I absolutely love the process of self-progression,” he continues. “I love seeing myself get better. And so, when you break it down to the bare bones, that’s what the motivator is: I enjoy the challenge of becoming better. And I apply that to everything in my life, whether it’s on the racetrack or if it’s in business.”

Along the way, Schultz has become quite an effective motivational speaker. I asked him what words of encouragement he might have for someone feeling defeated or tired or overwhelmed, or just lost in pursuit of their life goals.

“You know, the one thing that I always go back to when I’m in a tough spot is finding something that I thoroughly enjoy and pursue it, something that makes me smile and gets me excited to look forward to the next day. And for me that’s sport. And for so many people that is sport of some sort.”

“It doesn’t have to be competitive, but something that gives you a positive mental focal point, and a positive physical focal point. You put those two things together and it does wonders for anyone, whether it’s going to the gym and setting a goal for yourself, or it’s a competition that you wanna go to, or if it’s a trail ride or a trail run that you wanna do with a friend, you know.

“And incorporate a friend to go on that little goal-oriented journey with you. And that’s a very good way to motivate yourself and surround yourself with good positive people whenever possible.”

Chance of light snow with temps in low-to-mid-teens