There is no question that football has been Johnny Benson’s life for all of his 27 years. He finished high school while playing football for Becker. He got a degree in business and economics from St. John’s University while playing football there, even though he didn’t play often. When he wasn’t playing football, he was watching films of football with his grand-father who coached St. John’s for nearly 60 years. John Gagliardi was the winningest college football coach ever, and Johnny learned a lot from him – about football and about life and how you treat people. Benson had neither the time nor the interest to take up any other hobbies. Football was his life. The home Benson shared with his grandfather growing up – and where Benson now lives – is filled with photos, newspaper clipping collages, and other memorabilia of Gagliardi’s storied life and career. (Gagliardi died in 2018, but he got to see a full season of his grandson living the dream.) 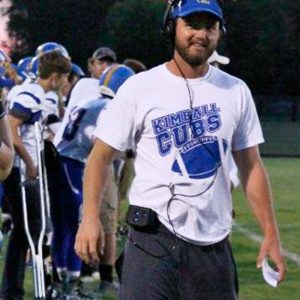 When Benson accepted the job as head coach of Kimball’s failing football team, and he got to coach his younger brother on the team, it was a dream come true. The next year, when he also got to teach special ed at Kimball, that only improved the dream.

Benson put his all into coaching at Kimball. The locker room was his coaching office, and it was not at all uncommon for him to be there late into the evening, or early in the morning; he easily worked 80-100 hours a week during football season, he says, just as he had done in business.

Since his hiring in 2017, Benson used his connections and experience to raise thousands of dollars for new uniforms and weight training, to bring in well-known speakers and motivators for the team, hire assistant coaches, and more. He pulled together a long-time losing team into a cohesive unit that worked well together. 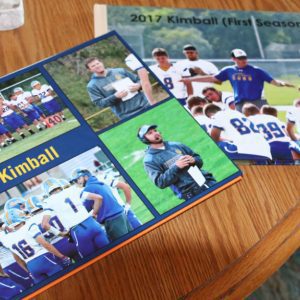 Two scrapbooks compiled by team parents of two seasons of Kimball Football under coach Benson are among Benson’s prized possessions.

His first year, the Kimball Cubs made national news after they ended the longest losing record in high school football in the nation: 42 lost games in a row, a record that ended in October 2017. The next year, the Cubs were 5-4 and won a playoff game.

One morning in October 2019, however, Benson was confused and humiliated when he was escorted to the principal’s office, and told he needed to remove his belongings from the school because he was being fired. He had no idea that morning why, or who had accused him of what.

Over the coming days, weeks and months, the nightmare would unfold.

Kimball football coach Johnny Benson before a home game during the 2019 season. On Oct. 10, Benson was removed from his classroom and told he would be fired. On the advice of an attorney, he resigned instead, effective Oct. 30.

The weekend before that, Benson and all eight of his coaches had decided and announced that a varsity player would be moved to a different position; the team agreed as well. After the next Wednesday practice (Oct. 9), the player stayed in the locker room to have a heart-to-heart with Benson about his chances of playing college ball after the position change; this was the first the player had spoken with Benson since the announcement of that change. The player’s phone had been off, apparently, during the nearly three hours after practice, and his family was concerned by the time they found out he was still at the school. According to a Stearns County search warrant, the player’s girlfriend drove him to his father’s house where hours of conversation are reported to have ensued. The search warrant states, “after some discussion between his father, stepmother, and girlfriend, it was determined that something was wrong. They thought he appeared to have been drugged and was not himself. It was determined they would transport him to the St. Cloud Hospital emergency room for evaluation.” There, the player was subjected to drug testing and a sexual-assault kit, all of which came back negative.

Again, according to the search warrant, the player said that coach Benson had applied Bio-freeze to his lower back and buttocks, while wearing a latex glove, to relieve stiffness and pain the player had complained of. In a later recorded statement, cited in the search warrant, the player claimed that the Biofreeze did not smell or feel the same as when he had it applied at a different time on his arm. The search warrant was served on the boys’ locker room at the high school, and Benson’s locker there in particular (which had been locked and untouched since Oct. 10). The warrant was for any form of drug or narcotic that could have been mixed with Biofreeze or other ointment or medication; the search warrant states that none of this was found, and that nothing was confiscated from the school.

Another search warrant was issued for cell phones and devices. Authorities took into custody two phones, two iPads, and Benson’s iMac computer (these were all kept in custody until June this year). Benson gave authorities full access (usernames and passwords) to everything on all five of these devices, as requested.

The school district hired attorney Liz Vieira to conduct an outside investigation. It appears that she rapidly reached a conclusion and recommended termination without the option of neutral arbitration. (In stark contrast, the Stearns County’s investigation was seven months long, and they decided not to pursue charges.) Because he lacked tenure, and on advice of his attorneys, Benson instead resigned. At an Oct. 30 special board meeting, the school district accepted his resignation. (All video recordings of Kimball school board meetings that used to be routinely available online – including the Oct. 30 meeting – have been removed from the district website, although discussion of employee disciplinary matters are always in closed session.)

Benson hired a criminal attorney, Joseph Friedberg, who insisted upon a polygraph administered by an objective third party; Benson passed it “with flying colors” Friedberg told us several weeks ago. He also hired a team of private investigators and reported to the Star Tribune for their story last week that these investigators had found nothing.

One has to have trust and confidence in “the system” to do its work. One thing stands out in all of this, however: Johnny Benson has never been informed of a single specific accusation against him. Accusations can be fought and proven wrong. After hours in the emergency room Oct. 10, the player told investigators that Benson had never done anything to others on the team.

When contacted for comment, the player’s father said, “The family has been advised not to talk to anyone.” He added, “It’s not over. There’s more to come.”

We did not contact the player directly nor do we name him, even though he is now 18, because he was a minor during the 2019 football season.

The Kimball school administration has deferred any comment to their outside attorney Liz Vieira who did not get back to us by press deadline.

At a board meeting after the end of football season, held in the cafeteria to accommodate a larger-than-usual audience, several coaches and parents attended to support Benson and to ask why he was being fired. The only answer the administration gave at that time was “because of morals,” Benson said, adding that the administration did not elaborate. And yet, Benson is quick to explain, he had not a single complaint or negative review in his three-year employment record at Kimball.

After the resignation of coach Benson, assistant coach Joe Anderson took over as head coach to finish the season, with the full support of the rest of the coaching team. At the end of the season, Anderson said, he believed that Benson would be hired back, and that Anderson planned to step back into the assistant position. Anderson was already preparing for off-season programs, including 7-on-7 and weight training, and he had the support of the Boosters to pay for it. Instead, Anderson and all the remaining coaches were fired at the end of the season.

Anderson, who has three sons in the Kimball schools, said that coach Benson was very popular with both kids and parents. He does not believe that there was ever any kind of inappropriate behavior between coach Benson and his players and students. In fact, Benson has been tutoring Anderson’s sons this summer. Anderson described the problem as “a toxic power struggle” with the administration, and hinted that Benson’s popularity may have exacerbated that.

“We were trying to change the culture here,” Anderson explained, “to build programs like we came from, the kind of program that wins.” Anderson added, “It’s not about winning though; it’s about having a program.” Anderson feels that the administration was constantly interfering with the football program, and he believes that the school administration needs to be held accountable for what was done to Benson.

“He was a great coach,” Anderson said of Benson. Anderson spoke of all the resources – the people, money, connections, and knowledge – that was squandered by the actions of the administration. “I loved working under him.”

On May 28, 2020, the Assistant County Attorney for Stearns County sent the county investigator a letter stating that his office would not pursue charges in this case. Benson’s devices eventually were returned. His reputation, however, would be another matter.

Benson and his coaches too, have stated that their biggest disappointment is the failure of the school administration to intervene or serve as a buffer.

The coaches also believe much of it has been about a power play. Because Benson had been hired by outgoing superintendent Jim Wagner and not any of the current administration, the coaches believe the administration – including the former Activities Director (AD) – has been against them nearly from the start. That AD is now in another district, but he did not leave until after Benson was removed.

As embarrassing and humiliating as the experience has been, Benson refuses to be humiliated. As he says, “People know. My family knows, I know – God knows – who I am, what I’m made of.”

“I’m very fortunate,” Benson says of the support from his six brothers and sister, parents, and family and friends. “Everybody has a cross to bear,” he says. “It can’t get any worse than this.”

“I’m there for the kids,” Benson says. “I don’t take myself seriously,” and he quickly added: “my work, yes!” He lives by his grandfather’s motto in life: “It’s never the wrong time to do the right thing.”

One of Benson’s attorneys, Paul Dworak, gave us this statement: “We are exploring potential civil actions against all the parties that harmed Johnny during the course of these blatantly false allegations, including the Kimball Area School District.”

Benson has not worked since being escorted from his classroom in October, although he has had a few offers. His dream job still is coaching football and teaching special ed; this is what he hopes to do for the next 40 years. He is one semester away from having his Master’s in EBD/Special Ed. After graduating college, he had some success in business for three years, enough to know that’s not for him long-term.

A new AD/head football coach and new coaching staff has been hired at KAHS for the fall.

All Benson wants to do is to have his reputation restored, and to get back to coaching football and teaching … somewhere. 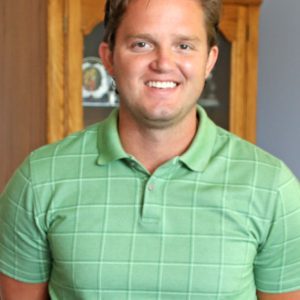 Johnny Benson at his home today. He has endured more than seven months of investigation, being totally cooperative throughout. Benson is not aware of any accusations against him, and the county has said that no criminal charges will be filed. Today, he just hopes to get another job coaching football and, ideally teaching special ed as well. Staff photos by Jean Doran Matua. 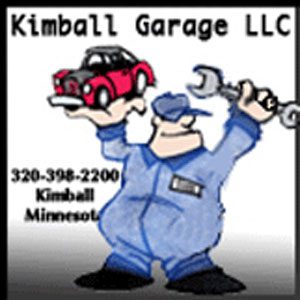